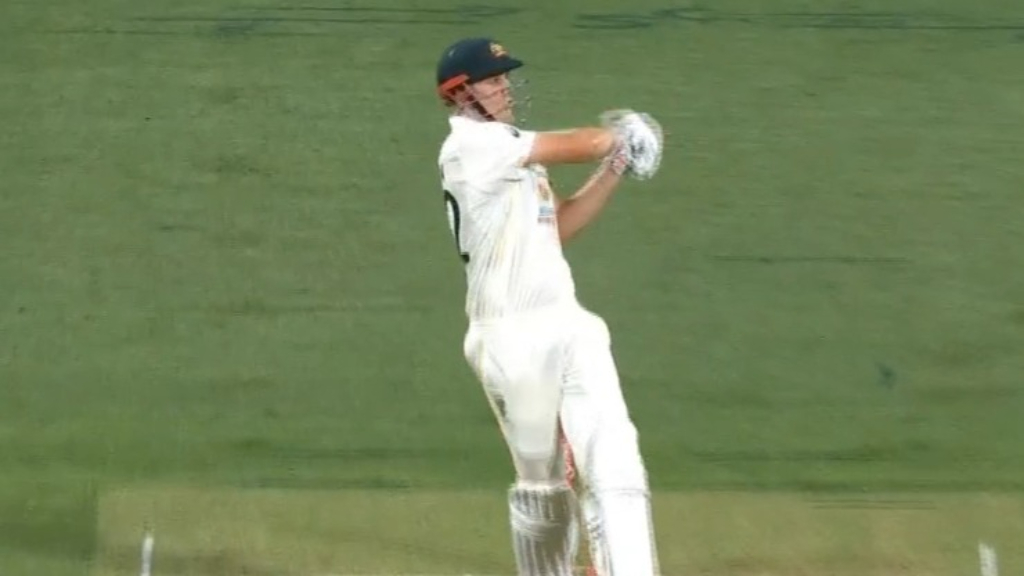 Well that's it for Friday - the covers initially came off, and we were told play would resume at 10.15pm. But just after the clock ticked past ten, the covers came back on and that's that.

Play will restart at 2.30pm AEDT tomorrow, and I can't wait to see how Australia play this - you'd think a quickfire display from the tail and then the likes of Starc, Cummins, and Boland ripping in with that pick ball on what is still a very tough wicket to pat on.

Rain has halted play here with Australia 6-241. Interestingly, Mitchell Starc was at the crease, finally promoted ahead of Pat Cummins in the batting order.

The big covers are on so it's unlikely we'll get play back underway tonight, but here's hoping.

Worst case that means we get an extra half an hour of play tomorrow - try and find the positives!

Cameron Green goes for 74 - good planning from England, Mark Wood digs one in short and Zak Crawley was waiting at deep square leg, as though they were expecting him to hit it exactly where he did

"It's always nice when a plan works, it comes off," Michael Vaughan said on commentary.

Australia have batted at a rapid pace today and you'd expect that to continue now, with hopes of getting England under the lights for a few overs tonight.

Definitely a season to relish for the hosts, who were aggressive with the bat, losing just one wicket while piling on 130 runs.

Cameron Green and Alex Carey will look to continue the up-tempo approach after the break, and who knows, we may not even see England bat today after that seemed inevitable in the first few overs.

A bit on at the moment. Cameron Green brings up his 50, and will now look to take centre stage after playing a support role to Head's heroics earlier.

Sure enough, the next ball is punched away for four, a glorious classic cover drive.

He's yet to record a Test century, is today the day?

Wow. That's nearly a carbon copy of the incident two balls' prior, when the catch fell safely. Instead, this time it carries softly to Ollie Robinson who takes a simple catch.

Head goes as a stunned silence falls over the home crowd - it's a soft and avoidable dismissal but it comes after a fantastic innings which has put Australia in a brilliant position.

Head dashes through for two and that's his hundred! An incredible innings given the circumstances, not to mention he is coming back from COVID and hasn't played in more than two weeks.

There was an extremely nervous moment here on 99 as Head gets a leading edge but it drops safely between bowler Chris Woakes and the man at mid-on. Phew.

He and Cameron Green have played brilliantly here, and Head records his second century of the series in just 112 balls.

Travis Head continues to play confidently while Cameron Green does likewise - a boundary for the former brings up the 100 partnership in less than 120 balls. Some brilliant work, first from Marnus and now from these two.

Green is on 43 while Head is 15 away from his second century of the series.

Straight and down leg side and he whips it down to fine leg for an easy boundary, taking him to 52 off 53 balls.

A sparkling knock from Head after what was an extremely testing first session for Australia on a very green wicket.

His ninth 50 in Test cricket - can he play another match-winning knock here, as he did in Brisbane?

Broad wheels off in celebrations as Labuschagne's stumps shatter! That's a bizarre dismissal, he got too far across his stumps and when he tried to move back and whip it down the leg side, he slipped over as the ball whizzed past.

"I just wonder if his spikes have slipped on the pitch here," said Michael Hussey on commentary. 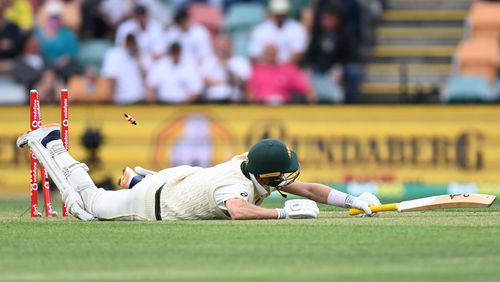 "Where was he going?"

Marnus goes after a quickfire 44, and that's 44 more than he should have got after being dropped by Zak Crawley. Those runs could be crucial.