The Sydney Sixers have booked a spot in the BBL final after a controversial last ball victory over the Adelaide Strikers.

The Sixers raised the ire of the Adelaide players when they exploited a loophole in the rules that allowed them to sub out an injured batter for the final ball.

Sydney needed two runs off the last ball to beat the Strikers' total of 167 and opted to retire an injured Jordan Silk on the final ball after initially sending him out in the final over.

The Sixers sent the fit Jay Lenton to the non-striker's end in his place, knowing that they would likely need to run two.

Hayden Kerr flicked the final delivery through mid-wicket with the Sixers needing to scramble for two runs.

Lenton's presence gave the Sixers a chance to grab the second run, but in the end it wasn't needed with a misfield sending the ball to the boundary to secure a four wicket win for the Sixers.

Adelaide captain Peter Siddle described the decision as "not a big issue" after initially showing frustration on the field when the call was made.

"You can retire blokes, at the end of the day," Siddle said.

"He can retire, it's not actually a big issue.

"Obviously I was disappointed at the time. It's just a retirement isn't it?... That's just a part of the game."

Moises Henriques defended the Sixers' decision makers, saying they acted "clearly within the rules of the game."

"Unfortunately, we had a guy go down with a hamstring, one of the fittest guys in the league. Probably something to do with our schedule and our five flights in eight days and so many back-to-back games…

"He normally bats five, so the fact that he's gone in to bat at eight – I think we're sacrificing enough as it is," Henriques said. 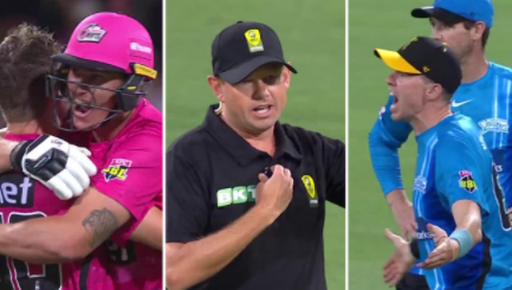 "My initial reaction to this, my gut feel says I don't like it," he said.

"The Sixers have said: 'there's a rule book there, we're going to exploit a rule here'."

Mark Waugh added: "It's in the rules but it's probably not in the spirit of the game."

For a daily dose of the best of the breaking news and exclusive content from Wide World of Sports, subscribe to our newsletter by   clicking here!