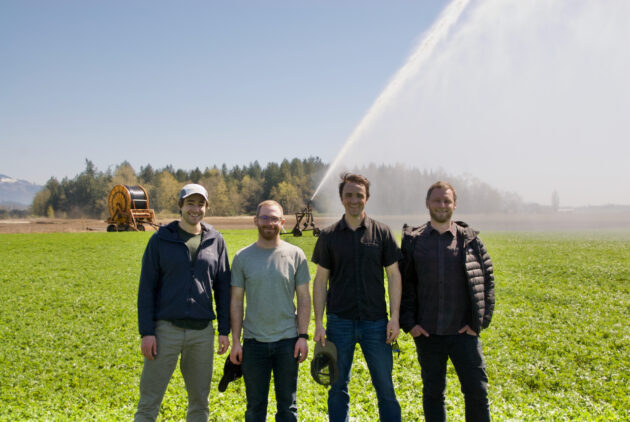 New funding: CODA Farm Technologies, an internet of things (IoT) agriculture startup with literal roots in Western Washington’s Skagit Valley, has raised $2.2 million in venture capital. The seed round was led by Lowercarbon Capital with participation from Voyager Capital, Arnold Venture Group and Will Canine, co-founder of Opentrons Labworks.

Backstory: CEO David Wallace grew up on his family’s potato farm, but left for college and graduate school, ultimately landing a job as a senior data scientist with Amazon Web Services for four years. His brother, Chief Technology Officer Connor Wallace, likewise abandoned the spuds for college and employment in science and technology.

The two eventually made their way back to their namesake Wallace Farms, applying their tech expertise to agriculture and launching CODA Farm Technologies in 2020.

The tech: Smaller farm tracts irrigate their land using the “traveling sprinkler” method — essentially a sprinkler on wheels is slowly pulled across a field at a steady rate. But the system can malfunction and stall, flooding a field, and it needs to be manually turned off. The Wallace brothers created a platform and hardware that controls the flow and shares irrigation data in real time to a cell phone dashboard.

As the company was taking off, widespread supply chain issues threw a wrench in operations, requiring on-the-fly innovation and changes to hardware designs.

“That’s been a big challenge for us,” David Wallace said. “It always comes down to a small, obscure part.”

The startup has found success despite the difficulties: they’ve sold 120 irrigation devices to 20 farms located in eight U.S. states and Canadian provinces.

The future: The new capital will help scale up production of the devices, allow for geographic expansion, and fund RD and data collection. Wallace expects their 5-person team to potentially double during 2022, and they’re looking to move some of their fulfillment work from Skagit to a warehouse space in Seattle.

Final word: Agtech has become an established sector as the farm industry looks to save labor and reduce its impact on the environment. CODA Farm Technologies is no exception. Based on data collected from 3,000 irrigation activities over the past year, the startup’s technology saved 21 million gallons of water and 4,300 gallons of diesel fuel.