Nathan Lyon took a catch on day two of the Hobart Test described by Australian cricket royalty Shane Warne as "an absolute screamer".

Diving low and to his left at backward point during the 25th over of England's first dig, Lyon unexpectedly pouched the ball to remove Ben Stokes off the bowling of Mitchell Starc.

The pink ball appeared to be cannoning to the off-side boundary as soon as it shot off Stokes' bat, the damaging all-rounder punching the back-of-a-length Starc delivery with power off his back foot.

AS IT HAPPENED: England torment Aussies under lights

But Lyon, not only Australia's greatest off-spinner in Test history but a brilliant fielder in the gully-point region, cut the ball off in a remarkable moment at Bellerive Oval. 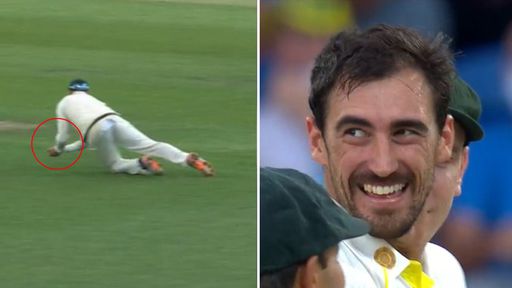 Nathan Lyon took an exceptional catch on the second day of the Hobart Test to send Ben Stokes back to the pavilion. (Fox Cricket)

Starc and his teammates were stunned at what Lyon had done.

"What a catch that is from Nathan Lyon," Warne said on Fox Cricket.

"He's absolutely creamed this, Ben Stokes. He thought it was four the minute it left the bat.

"But, somehow, Nathan Lyon anticipated this and took an absolute screamer ... Low, you look at how hard he hits this, Ben Stokes, inches off the ground. Good catch from Nathan Lyon ... Super catch." 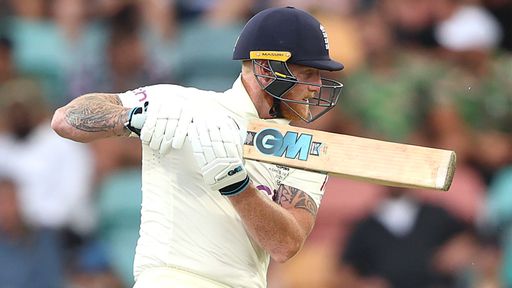 Ben Stokes' innings was ended by a tremendous Nathan Lyon catch in the Hobart Test. (Getty)

On a chaotic 17-wicket day, England were bowled out for 188 in reply to Australia's first-innings total of 303.

Australia then reached stumps on day two at 3-37, with second drop Steve Smith (17) in the middle with nightwatchman Scott Boland (three).