It’s the go-to destination for many party-loving sunseekers every summer, but a new study will fill Ibiza fans with dread.

Scientists have warned that up to 65 per cent of all beaches in the Balearic Islands will be permanently lost by the end of the century – and climate change is to blame.

A model was created to look at sea level changes under current climate change projections by researchers from the Oceanographic Centre of the Balearic Islands.

While the impact of the climate crisis on coastal areas has been widely studied, this is the first to show the impact specifically on popular tourist spots in the Balearics.

More than a quarter of the economy of the Balearic Islands comes from beach and sun tourism, so losing the beaches to climate change would be devastating.

‘Here we show that climate change will lead to the permanent loss of more than 50 per cent of the beach surface, rising up to more than 80 per cent during storm conditions,’ said study author Miguel Agulles.

These predictions are based on the worst case scenario of climate change, but efforts to cut carbon emissions could see a significant reduction in sea level rises around the world, the team said.

They also call on local and national governments to enact measures to reduce the risk of climate change on beaches, including by planting more seagrass. 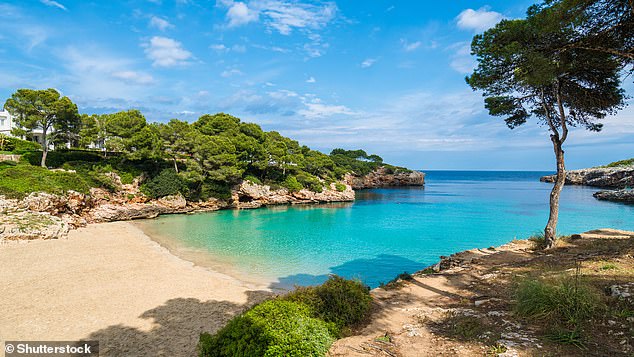 Up to 65 per cent of all beaches in the Balearic Islands will be permanently lost by the end of the century, according to a new study, and climate change is to blame 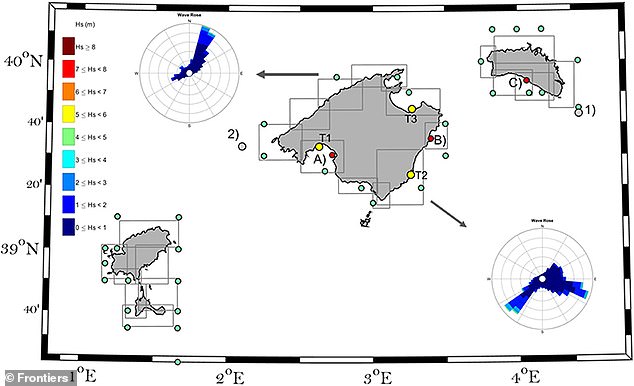 The findings show that climate change will lead to the permanent loss of more than 50% of the beach surface, rising up to more than 80% during storm conditions

WHAT IS THE PARIS AGREEMENT?

The Paris Agreement, which was first signed in 2015, is an international agreement to control and limit climate change.

It hopes to hold the increase in the global average temperature to below 2°C (3.6ºF) ‘and to pursue efforts to limit the temperature increase to 1.5°C (2.7°F)’.

It seems the more ambitious goal of restricting global warming to 1.5°C (2.7°F) may be more important than ever, according to previous research which claims 25 per cent of the world could see a significant increase in drier conditions.

The Paris Agreement on Climate Change has four main goals with regards to reducing emissions:

To aim to limit the increase to 1.5°C, since this would significantly reduce risks and the impacts of climate change

Governments agreed on the need for global emissions to peak as soon as possible, recognising that this will take longer for developing countries

Even under the most extreme climate change models, sea levels are not expected to rise everywhere on Earth to the same extent.

There will be differences caused by winds and ocean currents, according to researchers.

Earlier studies have predicted that around the Balearic islands, sea levels will increase by up to 26 inches, under the highest level of warming.

However, it isn’t just sea levels that will impact the quality of beaches for tourism.

Flood levels, rather than constant sea level rises, depend on tides and waves, and are more of an important indicator of the future shape of beaches, the team behind this study explained.

They created a new, cost-efficient and accurate method to model future flood levels along the coastlines of the Balearic islands.

They considered the shape and slope of each beach, how grainy the sand is on the beach, the extent of seagrass meadows and used it to predict coastal flooding.

‘A detailed analysis of the evolution of each beach in the Balearic archipelago is very demanding on computer power,’ Agulles told Frontiers.

‘We have therefore devoted considerable effort in our study to develop methodologies for the analysis and to optimise the computation.’

They discovered that it isn’t all bad news, with extreme events less extreme than previously thought.

Wave heights will be up to six inches lower than the current maximum heigh of up to 13ft, they predict.

Despite this, Agulles and colleagues warn there will still be ‘devastating inroads on the coastline’, leading to a reduction in the number of beaches.

They say this will be mainly due to the overall rise in sea level, with at least 56 per cent of beaches in the region permanently lost to the sea.

This, combined with regional projections of sea level and wave changes over the next 100 years, allowed them to predict the future total water level.

They applied their new model to 869 beaches across the Balearic Islands, and looked at what is most likely to happen for the next few decades.

Under the most pessimistic climate change scenario, 66 per cent of current beaches will be flooded, and lost to the sea by the end of this century.

This is under average conditions, but under the most extreme conditions it will increase to a loss of 86 per cent of beaches during a storm. 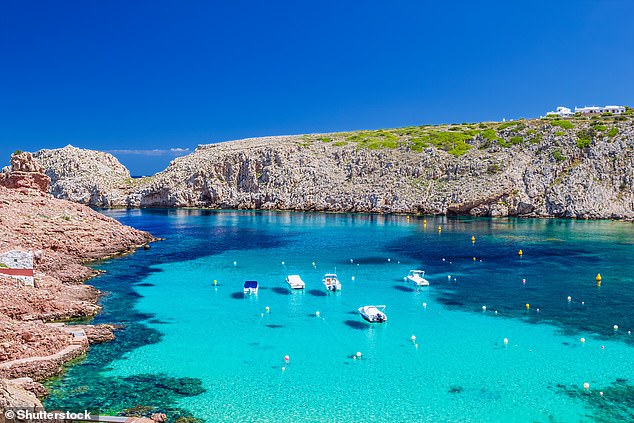 While the impact of the climate crisis on coastal areas has been widely studied, this is the first to show the impact specifically on popular tourist spots in the Balearics

In total, 72 of the 869 beaches of the region would permanently disappear, while 314 would be completely flooded during storm episodes.

Under a moderate scenario of emissions, considered the most likely under current climate change scenarios, 37 beaches would permanently disappear while 254 would disappear only during storm episodes.

In both cases, the average permanent loss of beach surface area by the end of the century will still be over 50 per cent, and could reach 80 per cent. 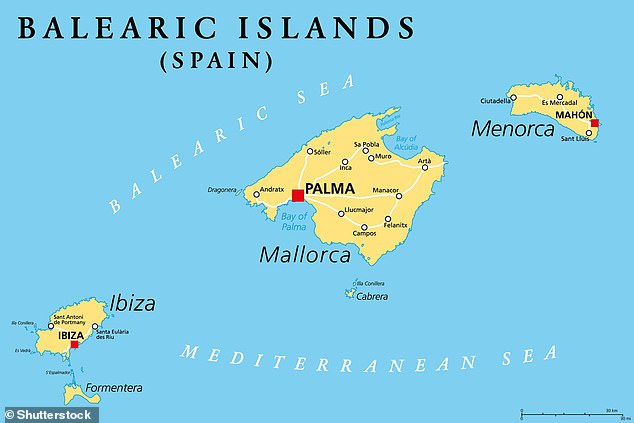 In total, 72 of the 869 beaches of the region would permanently disappear while 314 would be completely flooded during storm episodes

Co-author Dr Gabriel Jordà said the results show climate change is a serious threat to tourism in the islands, and beaches will be seriously impacted.

He said national and regional governments should make plans to minimise hte impact of storms by preserving seagrass – a natural protection against storms.

‘These projections indicate that adaptation plans for beach areas should be put in place as soon as possible.’

The findings have been published in the journal Frontiers in Marine Science.

Global sea levels could rise as much as 1.2 metres (4 feet) by 2300 even if we meet the 2015 Paris climate goals, scientists have warned.

The long-term change will be driven by a thaw of ice from Greenland to Antarctica that is set to re-draw global coastlines.

Sea level rise threatens cities from Shanghai to London, to low-lying swathes of Florida or Bangladesh, and to entire nations such as the Maldives.

It is vital that we curb emissions as soon as possible to avoid an even greater rise, a German-led team of researchers said in a new report.

Targets set by the accords include cutting greenhouse gas emissions to net zero in the second half of this century.

In addition, water naturally expands as it warms above four degrees Celsius (39.2°F).

Every five years of delay beyond 2020 in peaking global emissions would mean an extra 20 centimetres (8 inches) of sea level rise by 2300.

‘Sea level is often communicated as a really slow process that you can’t do much about … but the next 30 years really matter,’ said lead author Dr Matthias Mengel, of the Potsdam Institute for Climate Impact Research, in Potsdam, Germany.

None of the nearly 200 governments to sign the Paris Accords are on track to meet its pledges.