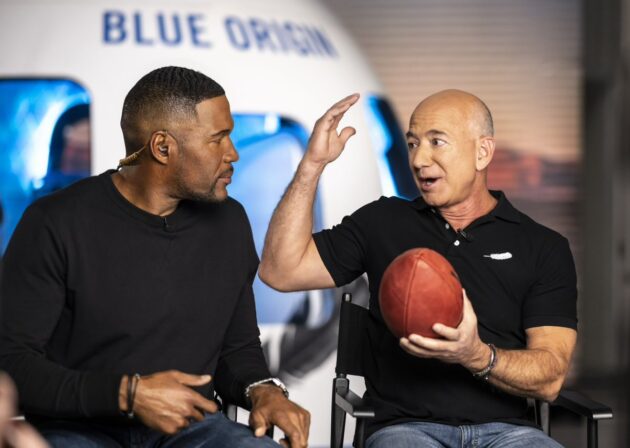 Former football star and future Blue Origin spaceflier Michael Strahan is given a football to take on his trip during an appearance on Thursday Night Football with Jeff Bezos, the founder of Amazon and Blue Origin. (Jeff Bezos via Twitter)

Jeff Bezos’ privately held Blue Origin space venture is starting to look more like the other company he founded: Amazon.

During the run-up to Saturday’s scheduled launch of the venture’s New Shepard suborbital spaceship, you could order a limited-edition Blue Origin sweatshirt created for spaceflier Michael Strahan’s brand, watch Strahan and Bezos mix it up on Thursday Night Football — and look forward to “Shatner in Space,” an Amazon Prime documentary about Star Trek captain William Shatner’s flight in October.

For now, the revenue from merchandising and media projects is certain to pale in comparison with the fares that Blue Origin’s suborbital spaceflight customers are paying, and with the multimillion-dollar awards that Blue Origin is getting from NASA for other space projects.

Nevertheless, the crossovers illustrate how one of Bezos’ big businesses could leverage marketing expertise from the other.

Bezos half-jokingly referred to the connection last month during a forum in Washington, D.C., when he was asked whether future space settlements would be able to get Amazon Prime delivery. “It’ll be built in,” he replied with a laugh. “Amazon hypersonic delivery: It’s coming soon to you.”

Saturday’s mission, due for liftoff from Blue Origin’s Launch Site One in West Texas at 8:45 a.m. CT (6:45 a.m. PT) represents one small step toward that future.

It’s known as NS-19 because it’s the 19th flight of a New Shepard spaceship — and it’s the third flight to carry people, coming after the trip that Bezos took in July and Shatner’s October trip.

This time around, two people are flying as Blue Origin’s guests: Strahan, who’s a co-anchor for ABC’s “Good Morning America”; and Laura Shepard Churchley, the daughter of Mercury astronaut Alan Shepard. New Shepard is named after the late astronaut, who is recognized as the first American in space by virtue of his suborbital flight in 1961.

Four others are paying undisclosed fares for the flight: Bess Ventures founder Lane Bess and Cameron Bess, the first parent-and-child duo to go into space together; Dylan Taylor, who is the chairman and CEO of Voyager Space and the founder of a nonprofit group called Space for Humanity; and Evan Dick, an engineer, investor and managing member of New Jersey-based Dick Holdings LLC.

This will be the first Blue Origin flight to carry a full complement of six spacefliers. Although Blue Origin considers them to be crew members, there’s no “captain” because the spacecraft is flown autonomously.

If all proceeds according to plan, New Shepard’s hydrogen-fueled booster would lift the crew capsule to a height just beyond 100 kilometers (62 miles), the “Karman Line” that serves as the internationally accepted boundary of space. The spacefliers would get a few minutes of weightlessness and a wide-angle view of the curving Earth through the capsule’s giant windows.

Then the reusable booster would fly itself back to a landing pad not far from where it launched, while the crew would make a parachute-aided touchdown in the West Texas desert. The whole flight is expected to take 10 minutes or so.

In addition to the six spacefliers, the capsule will be carrying postcards that they’ve personalized for the Club for the Future, Blue Origin’s nonprofit educational foundation — plus mementos including the football that Bezos handed Strahan during their spot on Thursday Night Football.

After landing, the crew members will receive custom-made wing pins from Blue Origin. They may also be the last spacefliers to receive astronaut wings from the Federal Aviation Administration. Today the FAA announced that it would stop issuing its Astronaut Wings at the end of the year.

“The U.S. commercial human spaceflight industry has come a long way from conducting test flights to launching paying customers into space,” FAA Associate Administrator Wayne Monteith said in a news release. “The Astronaut Wings program, created in 2004, served its original purpose to bring additional attention to this exciting endeavor. Now it’s time to offer recognition to a larger group of adventurers daring to go to space.”

The FAA’s announcement suggests that Bezos and Shatner will be among the spacefliers getting in on the last batch of commercial astronaut wings — along with Virgin Galactic’s billionaire founder, Richard Branson, who took a suborbital space ride just before Bezos did; and the crew of the Inspiration4 philanthropic mission, who rode into orbit on a SpaceX Crew Dragon in September. (Government-funded spacefliers, including NASA astronauts, will continue to get wings in accordance with decades-old traditions.)

This doesn’t mean future commercial spacefliers will miss out entirely on FAA recognition: The agency will continue to list those who travel beyond the 50-mile space milestone on its website.

The list is sure to grow longer: After his flight in July, Bezos said Blue Origin had brought in nearly $100 million in privately negotiated sales for future flights. That would buy a lot of Michael Strahan sweatshirts.

“Shatner in Space” is scheduled to make its debut on Amazon Prime Video on Dec. 15.