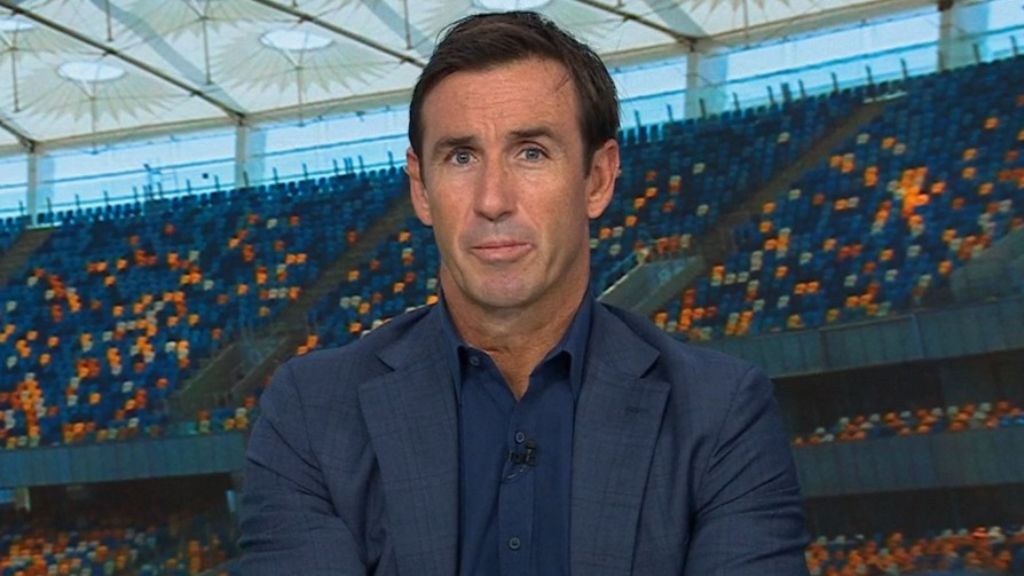 I've been saying since game two that NSW would have to improve on that performance to win the decider.

I really like the fact that Brad Fittler has kept his faith with the team that did the job in Perth. No one can doubt what Freddy's done since he's been coach with the Blues, so I'll back his team to get the job done at Suncorp next Wednesday.

The one selection issue that was always going to dominate the headlines was the centre pairing. Does Latrell Mitchell come in? Does Jack Wighton come back into calculations?

Both of those guys are left-sided players so it was always going to make it a really difficult choice, but I think it's fair enough that Freddy's decided to stick with Matt Burton on the left and keep faith with Stephen Crichton on the right.

Latrell took that decision out of Freddy's hands on Saturday and I applaud him for that, even though it looked to me like he could have stepped straight back into the Origin arena off the back of just one NRL game.

Latrell opts out of Origin finale

He nipped it in the bud, and I commend him for that, it's such a hard one when, as I keep saying, the Blues have to get better.

Would Latrell have made the Blues better in that cauldron? It's a tough question we'll never know the answer to now, but I think Latrell just wanted to stop all the chit chat, so he pulled himself out.

One thing I will say though, if he had decided to put his hand up you'd back him every day of the week. That try he set up for Damien Cook in the Rabbitohs' big win over the Eels on Saturday was an instant reminder of how good he is. He's a player who can do something out of nothing - there was nothing happening.

It was man on man and he saw that Reed Mahoney was in front of him and Reed Mahoney tackles big blokes all day for 80 minutes, yet Latrell Mitchell just got the ball and went straight over the top of him. He's a player that can create something out of absolutely nothing, so when he did that Freddy must have taken notice.

Who knows, maybe that would have been the play that got him selected, but Latrell knows how he feels, so he pulled himself out.

That leaves us with the team that was announced to wear the sky blue jerseys for game three on Monday morning. I think the Blues made some mistakes with the team for game one but they figured those out at the selection table for game two and the formula looks good now.

Obviously having to deal with the absence of Payne Haas is going to be tough, so Jordan McLean has a huge job to do on debut. But he'll look around and see Jake Trbojevic standing next to him and that will make him stand taller. They were a much better team with Jake in the side in game two.

To win game three for NSW it's all about playing simple footy and executing it perfectly. They'll need a high completion rate again and for me it starts in the middle of the field. They've got to win that battle in the middle and they didn't win that in game one. Queensland won the ruck and slowed the Blues down so the game was played on their terms.

In game two the Blues won the ruck and dominated that middle third of the field, if you do that in any game you give yourself a chance of winning. Once that area's decided, the game managers, the halves, have to play well and kick well and Cleary and Luai did that in game two, with the added bonus of having Matt Burton on the left hand side to put up those towering bombs.

In game one Cleary did pretty much all the kicking by himself and the Maroons really got stuck into him and nullified his kicking game. Game two he had more time to kick the ball, so I think the Blues need to have that same mentality in game three.

But all that's easier said than done at Suncorp. The Blues will have quite a few players playing a decider at Suncorp for the first time and it's not something you can really prepare for in camp.

So there's got to be good communication, and I think they'll practice that at training, but I think the fact that they've all now experienced Origin will be a major factor for why they'll be OK and why they'll handle it.

In saying that, I know from my own career, I had opportunities to play deciders at Suncorp and never got the victory up there. It's such a hard place to play, it's the spiritual home of Origin and the Queenslanders love it up there. They always grow a leg.

I still think game two will give the Blues confidence but the Maroons sub-consciously seemed to me to switch off, particularly once they got down 12, 14 points.

There's an old saying in footy, you win the game early and score the points late and that's what the Blues did. It was Tim Sheens' favourite line - you take all the petrol out of the opposition as early as you can and then the last 20 minutes you enjoy the game and play football, that's exactly what happened in game two.

The Blues were relentless in their attack on Queensland and Queensland defended really well, but they were out of juice at the end of the game and NSW got the chance to open up and play some expansive footy, which they did.

But up in Queensland it's a different mindset, they grow a leg, the crowd's on their side and it's just so loud and noisy. They generally get a few calls that go their way, so it's just a different environment.

Don't forget they've got Billy Slater, Johnathan Thurston and Cameron Smith in camp preparing the Maroons for what's to come. It's amazing what they've done in the Origin arena and what they continue to do as coaches.

Billy Slater with Reuben Cotter after Origin I. (Getty)

The Queensland players would be in awe of them and they'd really want to play for them, which is really important as a coach. You need players to really want to play for their coach, to want to bleed for their coach, and go out and do their best for them and there's no doubt having those guys in camp will make the Maroons a really tough side to beat in the decider. That's a big advantage for them.

But the Blues have got a fair coach as well in Freddy and he's got good staff around him, so the Blues will want to play for them too. That will even itself out and ultimately I don't think Queensland will get a big enough edge out of it to win.

I'm tipping the Blues to get it done in a tight one.

For a daily dose of the best of the breaking news and exclusive content from Wide World of Sports, subscribe to our newsletter by clicking here !