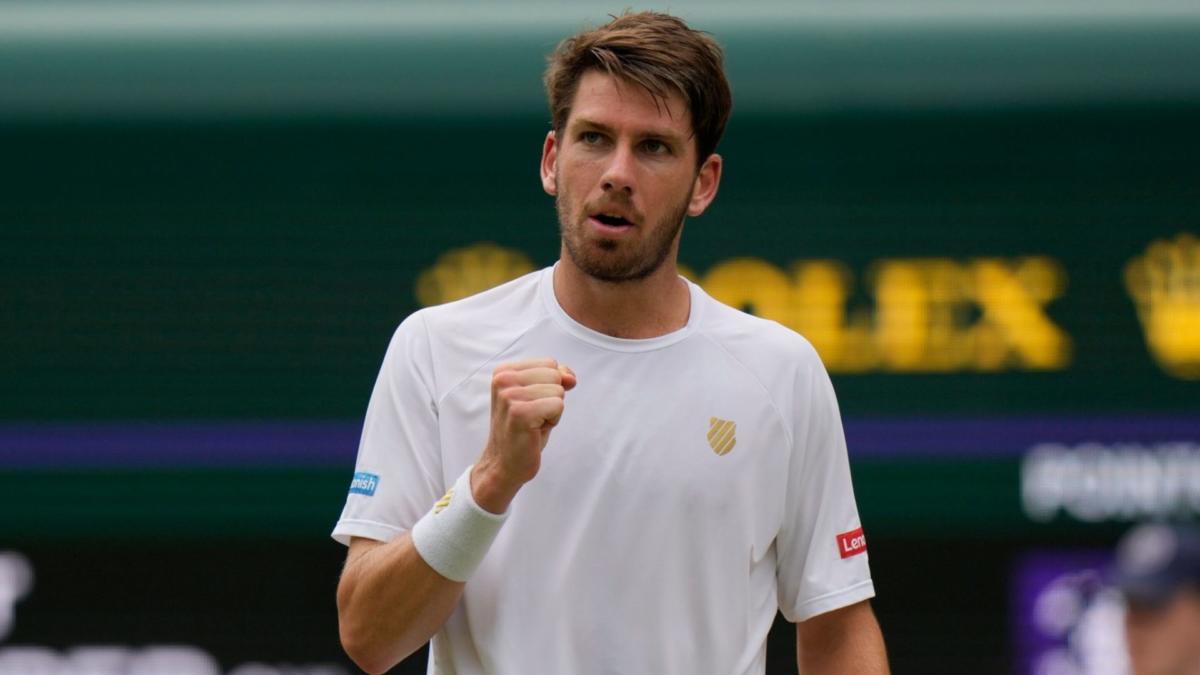 Cameron Norrie and Heather Watson made their last-16 Grand Slam debuts at Wimbledon’s first scheduled day of play on middle Sunday on Day Seven of the championships. Six-time champion Novak Djokovic, Spaniard Carlos Alcaraz and third seed Ons Jabeur made up a star-studded line-up as the All England Club also celebrated 100 years of Centre Court.

Sunday was the focal point for marking the centenary of Centre Court with a 30-minute celebration before play began, there was a parade of former champions, and a live musical performance from Freya Ridings before everyone got to relive some magic moments from the last 100 years. Here is to the next 100 years!!!

Back to the current championships though, and Watson faced Belgian Jule Niemeier first up on Centre, this was Watson/s 12th Wimbledon appearance of the course and she has seen it all over those years, and a Quarter-Final place in this most wide open of draws was tantalisingly close, but in her way stood a German who in her debut at the championships has been making a name for herself, so this was sure to be a very tough assignment for both.

Both held serve early on but at 2-2 Niemeier broke the Brit and then whistled through the rest of the set to take it 6-2, rather flattening the Centre Court atmosphere, Watson battled gamely and broke the German early in the second set, but Niemeier recovered and broke the Brit back, before breaking again and serving out to reach the Last Eight as she continued to shine at this year championships.

Tatjana Maria and Jelena Ostapenko got proceedings on Court One underway. The unseeded German who has a world rank of 103, had never got past the third round in nine previous appearances at SW19 and was up against a powerful 12th-seeded Latvian who had pretty much-dismantled everyone in her way so far. But it wasn’t to be on this day.

A tight first set saw it go the way of the 12th seed 7-5, and two more tight sets followed, the Latvian had match points in the second set but was instead broken, and the German took that set 7-5 before repeating the scoreline in the final set to win what was a terrific game of Tennis and seeing the 2017 champion dumped out of the competition, the 34-year-old Maria, who only gave birth last April, continues her astonishing run at these championships, and with the draw the way it is, she must really fancy it now but has a very tough looking contest against fellow German Niemeier in the next round.

And then it was the turn of men’s Ninth seed Norrie, 26, who overcame the challenge of Spaniards Pablo Andujar and Jaume Munar, where he fought back from two sets to one down to win, before beating Johnson in the third round in his best performance so far, and he was up against another American, 30th seed Tommy Paul, who was vying to reach the Quarter Finals in his very first appearance at these championships.

These two are very good friends off court and practice together a lot, so they know each other’s games very well, and it was the British No.1 who took the first set 6-4 to give the crowd plenty to cheer about, and at 5-4 up and serving for the second set it looked likely Norrie was about to go two sets up, but Paul broke back to level at 5-5, oh no you thought, but don’t worry because Paul then immediately lost his serve and Norrie managed to serve out at the second time of asking to take a two-set lead, and a party atmosphere enveloped Court One with the ‘Norrie Norrie Norrie….oi oi oi’ chants being rolled out again.

And just like the first two sets, Norrie broke his opponent’s serve and knew all he had to do was to hold serve to reach his first ever Grand Slam quarter finals, no biggie right? He managed to do this and served for the match at 5-4, and he held his nerve in front of an electric atmosphere to claim a final eight berth and keep his dreams of a remarkable Wimbledon title going, well played Cam, well played!!!

Top seed Djokovic continued the defence of his men’s title against Dutch wildcard Tim van Rijthoven. It’s been an amazing week for the Dutchman who is ranked 104 in the world, he had never won a match on Grass until this tournament, and if he could pull off the most astonishing result here would find himself in the Quarter Finals, but that would be a tall order against a man going for his seventh Wimbledon crown in eleven years.

The Serb had not dropped a set since his first-round match against South Korean Kwon Soon-woo, but despite knowing each other since their junior days, Djokovic and Van Rijthoven have never met on court before, and when Djokovic breezed through the first set 6-2 in looked like this challenge was one challenge too far for the exciting Dutchmen.

However, the wildcard is full of confidence after an amazing few weeks and stunned the No.1 seed by taking the second 6-4 after eventually managing to serve it out, saving break points in the process, and if Djokovic didn’t know he was in a game already then he certainly did after that set. However, that was as good as it got for the Dutchman.

This is because Djokovic raced through the next two sets dropping only three more games with some vintage tennis to win it in four, he had been the master of shutting down the wildcards momentum after that second set, it’s what true champions do isn’t it, whereas for Van Rijthoven his levels dropped somewhat after that impressive second set, but he will be back for sure, it’s been a magnificent few weeks for him as said before. Novak marches on though and is very much the man to beat at SW19.

Elsewhere, 19-year-old fifth seed Alcaraz faced 10th seed Jannik Sinner, of Italy, second on Centre Court, with the winner setting up a mouth-watering quarter-final against Djokovic. The Spaniard has wowed the crowds with his scintillating tennis so far, and this was billed to be some match against an Italian, like Alcaraz, who was making only his second appearance at these championships and having a superb tournament so far.

These two are also good friends off the court, and both have said that they could be rivals for years to come on the grass at Wimbledon, but Sinner is two years ahead of Alcaraz in terms of where he is in his career, and that seemed to be playing out as the Italian blasted through the first set 6-1 before taking the two-set lead when winning the second 6-4, could the Spaniard fight back and continue his amazing run?

He battled gamely in the third set and had break points when leading 4-3, but failed to take them, this was probably the difference up to this point, as the Sinner return of serve was very impressive and had got him to this strong position in the game, but after the set went to a dramatic tie-break, where Alcaraz saw three set points disappear and Sinner see two match point go by, the Spaniard took a fourth set point and take this brilliant match to a fourth set, come back on!!!

Momentum certainly seemed to be with Alcaraz, and he had several break points on the Sinner serve at the start of the fourth, but Sinner dug in and managed to hold serve before breaking the Spaniard, again Sinner fought back from 0-40 down on his serve to save more break points, and then ended up serving for the match at 5-3, this after Alcaraz saved three more match points on his own serve, and after Sinner had saved yet another break point, he managed to take his sixth match point and set up a Quarter Final against the number one seed.

Tunisian Jabeur, the highest women’s seed left in the competition, was third on Court One and took on 24th seed Elise Mertens for a place in the last eight. Both ladies broke each other serve early on but Jabeur lead 4-3 and was a break-up, the Belgian did fight back to force a tie break, but the Tunisian won that 11-9 to go a set ahead, this after saving five set points!!!

Could Mertens possibly get over that disappointment? She went a break down at the start of the second set but then broke back straight away, and it went on serve until Mertens served to stay in the match at 4-5, where she served a double fault to hand her opponent the win and send the African into the Quarter Finals where she will face Czech Bouzkova and is now arguably the favourite to win the Ladies Singles crown this year.

There were only two singles games on the outside courts and both were on Court Two, Czech Marie Bouzkova was up against Frenchwomen Caroline Garcia, both ladies are unseeded and looking to get to the Quarter Finals for the very first time, the Czech was a break up in the first set before Garcia got it back to 5-5, but Bouzkova managed to break again to win the first set 7-5, and the world no.66 went up a gear in the second set and won it 6-2 to continue her brilliant run in this year’s championships.

And after that match it was a Men’s Last 16 tie between the unseeded David Goffin of Belgium and American 23rd seed Frances Tiafoe, Goffin used to be a top ten player around five years ago and reached the Quarters back in 2019, and the now ranked 58th player in the world was looking to repeat that success of three years ago, and opponent Tiafoe, making his fifth Wimbledon appearance, had never been past the third round, so this was new ground for him.

A 70-minute first set saw the Belgian edge it 7-6 on a tie break, but Tiafoe then fought back to win the next two sets 7-5 7-5 as the match passed the three-hour mark, although the American called for a trainer at the end of the third set, and after he had popped a pill for a stomach issue, he was ready to resume and attempt to win a third straight set and get through to the Last Eight. Would the slight inconvenience affect the American though?

Well, initially it looked like it might of as Goffin raced into a 5-1 lead in the fourth with the American looking very flat, but Tiafoe then twice broke back and was serving to tie it up at 5-5, however, Goffin then broke back to take the fourth set, sending it into a fifth set, which resulted in the 23rd seed smashing his racket against his chair and receiving a warning from the umpire. Where was this match heading, it was anyones guess?

Both saved their best tennis for the final set, and at 5-5 after both players had held their serve all the way, Tiafoe had two break points to lead 6-5 and serve for the game, but Goffin battled hard and saved those and held serve before he broke the Americans serve to win the decider 7-5 and win a marathon in 4hrs 32mins, a terrific battle and the Belgian, who looked exhausted and slightly in disbelief afterwards, takes on British No.1 Norriein the Last Eight.

Another cracking day of tennis at SW19 then, for all results from the day’s play and tomorrow’s schedule, visit https://www.wimbledon.com/en_GB/scores/schedule/index.html and I’ll be back with Day Eight’s action tomorrow… 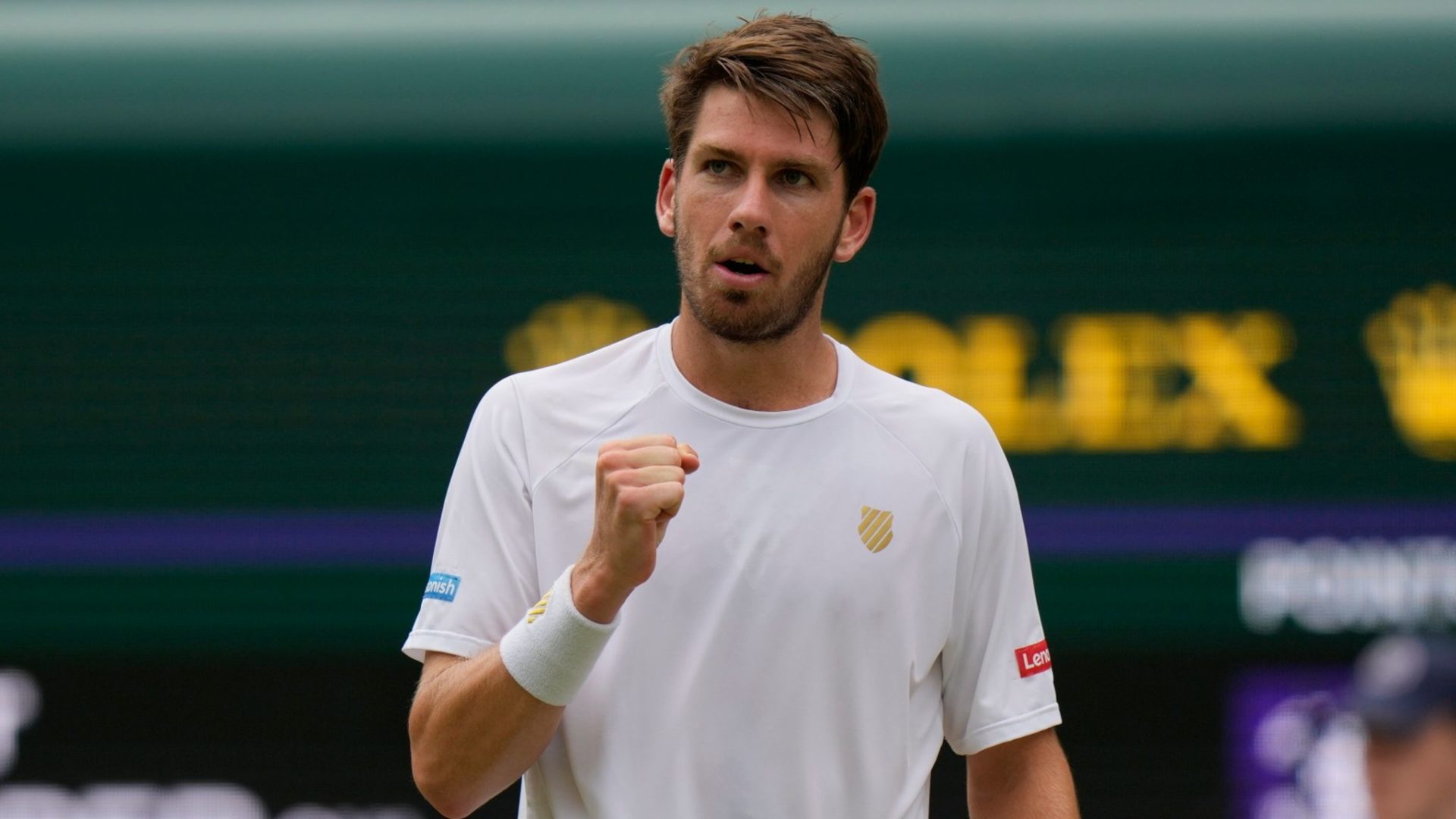